Amplify Studio is a visual interface that simplifies front- and backend development for web and mobile applications. We released it as a preview during AWS re:Invent 2021, and today, I’m happy to announce that it is now generally available (GA). A key feature of Amplify Studio is integration with Figma, helping designers and front-end developers to work collaboratively on design and development tasks. To stay in sync as designs change, developers simply pull the new component designs from Figma into their application in Amplify Studio. The GA version of Amplify Studio also includes some new features such as support for UI event handlers, component theming, and improvements in how you can extend and customize generated components from code.

You may be familiar with AWS Amplify, a set of tools and features to help developers get started faster with configuring various AWS services to support their backend use cases such as user authentication, real-time data, AI/ML, and file storage. Amplify Studio extends this ease of configuration to front-end developers, who can use it to work with prebuilt and custom rich user interface (UI) components for those applications. Backend developers can also make use of Amplify Studio to continue development and configuration of the application’s backend services.

Amplify Studio’s point-and-click visual environment enables front-end developers to quickly and easily compose user interfaces from a library of prebuilt and custom UI components. Components are themeable, enabling you to override Amplify Studio‘s default themes to customize components according to your own or your company’s style guides. Components can also be bound to backend services with no cloud or AWS expertise.

Support for developing the front- and backend tiers of an application isn’t all that’s available. From within Amplify Studio, developers can also take advantage of AWS Amplify Hosting services, Amplify‘s fully managed CI/CD and hosting service for scalable web apps. This service offers a zero-configuration way to deploy the application by simply connecting a Git repository with a built-in continuous integration and deployment workflow. Deployment artifacts can be exported to tools such as the AWS Cloud Development Kit (AWS CDK), making it easy to add support for other AWS services unavailable directly within Amplify Studio. In fact, all of the artifacts that are created in Amplify Studio can be exported as code for you to edit in the IDE of your choice.

You can read all about the original preview, and walk through an example of using Amplify Studio and Figma together, in this blog post published during re:Invent.

UI Event Handlers
Front-end developers are likely familiar with the concepts behind binding events on UI components to invoke some action. For example, selecting a button might cause a transition to another screen or populate some other field with data, potentially supplied from a backend service. In the following screenshot, we’re configuring an event handler for the onClick event on a Card component to open a new browser tab: 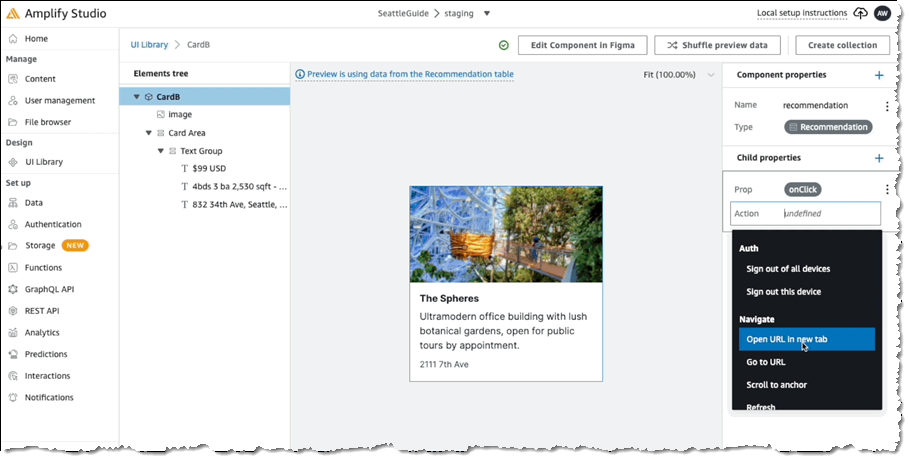 For the selected action we then define the settings, in this case to open a map view onto the location using the latitude and longitude in the card object’s model:

Extending Components with Code
When you pull your component designs from Figma into your project in Amplify Studio using the amplify pull command, generated JSX code and TypeScript definition files that map to the Figma designs are added to your project. While you could then edit the generated code, the next time you run the pull command, your changes would be overwritten.

Component Theming
To accompany the GA release of Amplify Studio, we’ve also released a Figma plugin that allows you to match UI components to your company’s brand and style. To enable it, simply install the Theme Editor plugin from the Figma community link. For example, let’s say I wanted to match Amazon’s brand colors. All I’d have to do is configure the primary color to the Amazon orange (#ff9900) color, and then all components will automatically reflect that primary color. The Theming documentation provides the full set of design tokens that you can modify with the Theme Editor.